The building of railways in Great Britian made it more affordable to travel, and the middle and working classes began going to seaside resorts to enjoy themselves – a pleasure previously only available to the wealthy class. Soon, a souvernir-industry began to flourish in the seaside resorts, and eventually this led to the creation of special British seaside postcards.

In the early 1930s, cartoon-style saucy postcards became widespread at the British seaside resorts. They often made use of innuendo and double entendres, and featured stereotypical and easily recognizeable stock characters such as put-upon husbands, big bossy wifes, and airheaded young pretty women.

At the peak of their popularity, the sale of saucy postcards reached 16 million a year in Great Britian – most of them sold in small shops along the shoreline.

One very important publishing company for saucy seaside postcards was Bamforths. This company was founded in 1870 by a portrait photographer, but didn’t start making illustrated sauce seaside postcards until 1910. Bamforths postcards wasn’t just sold on British beaches; they were exported to many other parts of the world as well.

In 2001, Ian Wallace purchase the rights to over 50,000 Bamforths postcard designs, including saucy postcards, general tourist postcards and a wide range of topographical postcards. At the hundred year anniversary in 2010, Wallace relaunched the publication and sale of the postcards in partnership with the Jane Evans Licensing Consultancy. Currently, a printer in Leeds, England have the exclusive right to reprint and distribute the Bamforths designs. 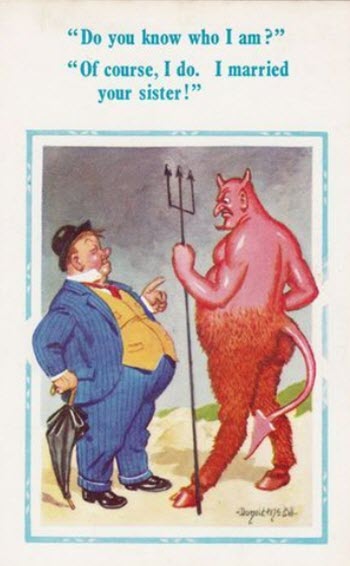 A very important artist for sauce British seaside postcards was Donald McGill (1875-1962). His most popular card sold in approximately 6 million copies and is listed in the Guiness Book of Records. This postcard features a bookish man and an embarrased pretty woman sitting under a ree, with the caption: “Do you like Kipling?” / “I don’t know, you naughty boy, I’ve never kippled!”.

McGill’s process consisted of making colour-washed drawings that he then reproduced as postcards. Throughout his postcard career, McGill produced an estimated 12,000 postcard designs, which were used for approximately 200 million printed postcards.

At the height of his popularity, he was paid 3 guineas per design. He got paid this flat fee only; no royalties or other payments based on how well the cards sold.

Having lost a foot in a school rugby accident as a boy, McGill needed a job that didn’t require much running around, and he became a naval draughtsman; making detailed technical drawings. In 1904, an in-law saw a get-well card that McGill had drawn for a sick newphew and encouraged him to producing more cards. His cards became very popular, and within a year, making postcard art was his full-time job.

Today, his cards are widely collected and appriciated, and seen as a window providing important insight to the prevailing social mores of his time. Original artwork by Donal McGill have been sold for thousands of pounds.

Even though McGill died in 1962, some of his postcards are dated to 1963, because when he died all his designs for the 1963 season had already been finnished.

Crack down and censorship in the 1950s

In the early 1950s, the newly elected Conservative government cracked down on the bawdy British seaside postcards, which they claimed contributed to the deterioration of British morals. The government was especially hostile towards the Donal McGill postcards, and this culminated in a major trial in Lincoln in 1954 where McGill was found guilty of breaking the Obscene Publications Act of 1857 and fined £50 with £25 costs.

This ear was a devastating period for the saucy beach postcard industry in Britain, with many retailers refusing to the sell the cards for fear of legal repercusions. The seaside town of Ryde on Isle of Wight did for instance experience a police raid on shops in 1953 with 5,000 postcards being confiscated.

As a result of the new censorship, many of the smaller production companies that were heavily focused on saucy cards went into bankruptcy.

In the late 1950s, the heavy censorship was finally eased off and saucy cards could return to the mainstream market. In 1957, McGill gave evidence before a House of Commons Select Committee set up to amend the Obscene Publications Act.

In the 1960s, social mores were changing in Britain and the saucy seaside postcards went through a revival. Some even considered them a type of art.

In the 1970s, and 1980s, the general quality of the saucy seaside postcards deteriorated and they became less popular among souvernir buyers and postcard senders. Changing attitudes towards the cards’ content also contributed to a decline in sales.

Today, original saucy seaside postcards from the 1960s or earlier a highly sought after by collectors, especially if they have been preserved well.