Deltiology = the study and collection of postcards

The term deltiology is derived from the Greek language. Deltion is the diminutive form of deltos, which means writing table or letter. The term deltiology was coined in the 20th century by Professor Randall Rhoades in Ashland, Ohio, USA.

Deltiologist = someone who studies and/or collects postcards

Deltiophile = a lover of postcards

Deltiography = the making of postcards 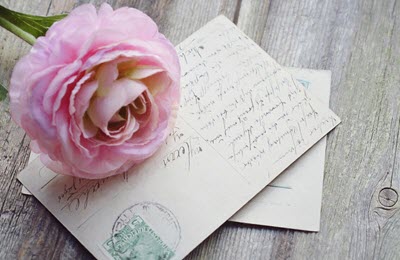 Globally, deltiology is the third largest collecting hobby, surpassed only by philately (postage stamp collecting) and numismatics (collecting currency, including coins, tokens, paper money, and related objects). In many countries, it is possible to join a deltiology club to find other collectors and participate in postcard shows and similar events. Postcards aren’t just collected by individuals; there are many historical and genealogical societies that collect postcards since they can provide important information about the past – including information that can not be obtained from books, maps and similar sources since it wasn’t considered important enough to preserve back then.

Can you make money collecting postcards?

There are a lot of postcards that are worth a lot of money but it is very hard to make money as a card collector. It is something that should be done for the love of the cards and not for profit.  It is possible to make money trading postcards and selling postcard accessories but to do so you will need another mindset than a collector.  You can be a collector as well but you need to focus on the business side first. Not the love of cards.  You have to invest in things that are easy to sell, that is popular at the moment, not the cards you find most interesting.  Not the cards you want in your collecting.

Many deltiologists have one or more special fields of interest. Here are a few examples of different types of postcards: 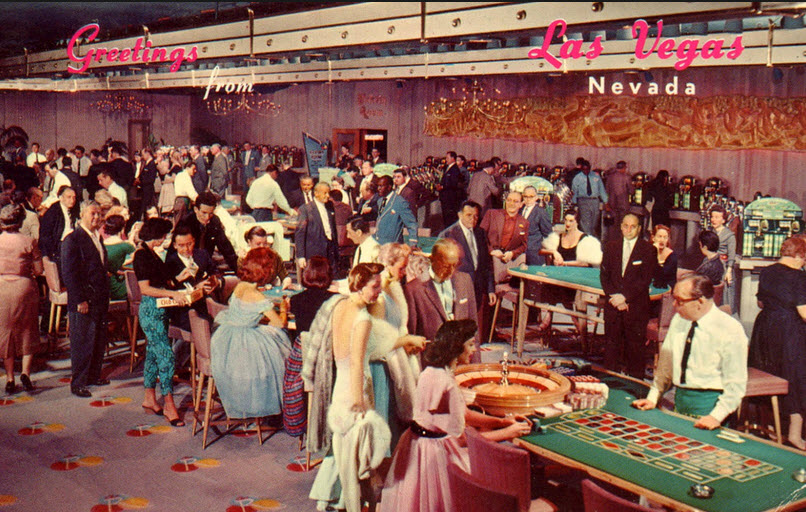 Casino gambling has been very popular in the US for a long time and sending post cards from casinos used to be popular. Even people who did not visit any casino would send casino themed postcards to make it seem like they had.  Casino gambling was something glamorous. Something that required you to have a disposable income to spend.  It was also a little bit sinful that made it even sexier and more exotic.

Hopefully, more casinos will become more elegant and require formal wear in the coming years.  Live casinos will need to differentiate the experience they offer from the experience you can get in an online casino. One way to this can be to make it a more exclusive experience akin to fine dining.   Online casinos have made casino gambling available to everyone so there is no reason not to have a dress code. If you want to play in your tank top or t-shirt then you can play at home but if you want to visit a casino then you have to dress up and experience a more exclusive establishment.

If you want to try online gambling, then you can do so for free using a no deposit bonus or you can deposit money into your account and receive a large welcome bonus.  This bonus can be worth several thousand dollars.  You can find and compare bonuses on this website.  You often have to deposit at least USD10 to get a welcome bonus.  Most online casinos allow you to play for fun without betting any money.  To do so is free but you can not win any money playing for fun.

Online casinos are turning into the people’s casinos.  Hopefully, live casinos will turn into elegant places worthy of adorning postcards once again.

Cards with messages have been used even before there was a national postal service available, but they are beyond the scope of this article. Instead, we will look at postcards (with picture or blank) that were intended to be sent through regular mail, at a letter rate or cheaper.

We will start with a bit of information about the oldest known picture postcard that’s acknowledged among postcard collectors as a postcard. 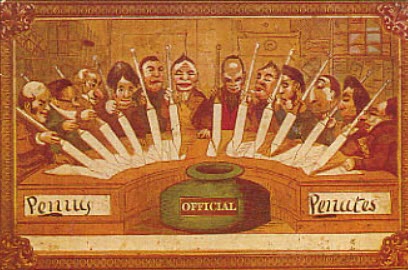 This postcard, which was hand-painted, was sent to Theodore Hook (1788-1841) from Fulham in London in 1840. The postcard is believed to have been created and posted by Hook himself as a practical joke on the postal service because Hook was a known jokester and the image on the postcard is a caricature of workers in the post office. 1840 was the year when the Penny Black, the world’s first adhesive postage stamp, was issued, and a Penny Black was used to send the card to Hook. In 2002, Hook’s postcard was sold for a record-breaking £31,750.

Before the advent of postage stamps, it was normal for recipients in Great Britain to pay postage on delivery, with the cost depending on the number of sheets and distance traveled. With the Penny Black, the sender paid the postage in advance and could send up to 1/2 ounce in Great Britain for the flat rate of one penny regardless of distance. Of course, this invention would be of great importance for promoting the practice of sending postcards.

Early postcards in the United States

The first postcard sent by regular mail, at letter rate, in the United States, was a card postmarked in December 1848 containing printed advertising.

In the 1860s, postal cards were used by William Henry Jackson – an artist and photographer painting Civil War battlefields – to write to his family.

In 1861, the first commercially produced postcards in the United States were created. Their creator was the Philadelphia based printer John P. Charlton. Charlton patented the postal card and then sold the rights to his friend Hymen Lipman. Lipman began printing and selling standardized postcards that didn’t have any picture but did have a decorative border.

The postcard format with a picture on the front and a divided back (one field for the message and another field for the address) wasn’t in use in the United States until 1907, despite being popular in other countries much earlier than this. Read more here.

Postcards with an integrated postage stamp

In 1870, the British Post Office began issuing (no picture) postcards where the stamp was printed as a part of the design. The cost of postage was included in the price of the card, so the sender didn’t need to buy a separate stamp and attach to the card before mailing it. Initially, these postcards came in two sizes, but the larger size was withdrawn pretty soon since it turned out to be more difficult to handle than the smaller one. 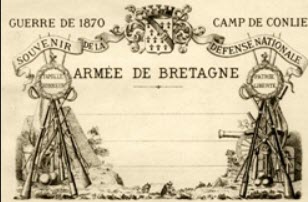 The first known printed picture postcards (i.e postcard with an image on one side) was created at Camp Conlie, France, in 1870. If they really truly count as postcards is debatable because there was no designated area for stamps and there is no evidence that they were ever posted without envelopes.

Be that as it may, they were created by Léon Besnardeau (1829-1914) in the Conline training camp for soldiers during the Franco-Prussian war, and the cards had a lithographed design printed on them. Here is a picture:

The text means “War of 1870. Camp de Conline. Souvenir of the National Defence. Army of Brittany.”