The oldest U.S. postcard sent by regular mail at letter rate that we know of was an advertising card postmarked in December 1848.

In the 1860s, a painter of Civil War battlefields name William Henry Jackson used postcards to send messages to his family back home.

The first commerically produced postcards in the United States 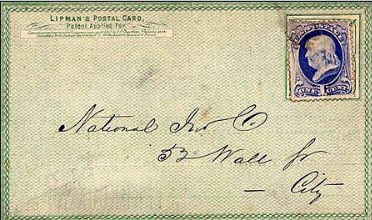 In 1861, a Philadelphia-based printer named John P. Charlton patented the postal card and sold the rights to his friend Hyman Lipman, who was also a printer. Lipman began printing and selling standardized postcards. These early postcards didn’t have any picture, but they did have a decorative border.

1873 was a notable year in the history of postcards in the United States.

In 1898 the US Congress passed the Private Mailing Card Act, making it legal for private publishers produce postcards that could be mailed for one cent per card (the cost for a letter was 2 cents). Before that, the Post Office had a legal monopoly.

Even after the act had been passed, there were many restrictions in place. 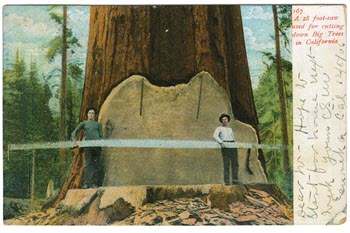 Being allowed to use the back of the card for both the message and the address meant that the U.S. postcard senders could revel in postcards with beautiful front sides. Because of this, 1907 is generally acknowledged as the start of the Golden Age of Postcards in the U.S. In 1908, more than 677 postcards were mailed in the country.

Postcards imported from Germany were very popular during the early years of the Golden Age, but in 1910 the U.S. introduced tariffs on German-printed postcards. They could still be imported, but the tariffs made them more expensive than before.

In 1915, World War I stopped the import of postcards from Germany. This is considered the end of the Golden Age.

As German imports were no longer available, national producers tried to meet the increased demand on U.S. made postcards. These cards were generally of poor quality and many were simply reprints of older cards rather than new designs. The characteristic white border around the pictured area has given its name to this era.

By the early 1930s, the U.S. based printers had caught up and could offer better quality postcards than during the white border period. The postcards during the Linen Era weren’t actually printed on linen, but on paper that had a high rag content and was finished with a pattern which gave it a textured cloth appearance. This pattern was only present on the face of the postcard; the reverse was smooth.

Thanks to the high rag content and “textile” texture, Linen Era postcards could utilise dies that produced much more colourful and vibrant images than what the White Border Era postcards had to offer.

Examples of postcard producers from the Linen Era: