PHQ cards are postcards issued by the British Post Office depicting the designs of their commemorative stamps. PHQ cards have also been created for some of the definitive stamps.

Where can I buy PHQ cards? 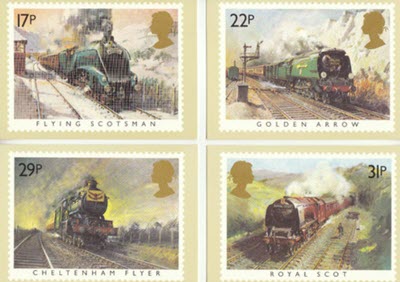 When commemorative stamps are about to be issued by the British Post Office, you can normally buy the associated PHQ card or cards in main post offices throughout Great Britain from around two weeks before the stamps are released.

Most collectors of PHQ cards belong to one of the following groups, although there are certainly plenty of examples of collectors whose interests overlap two or more of the groups.

Fortunately for postcard collectors, the PHQ cards have had a very good sorting system in place from the very beginning. The first PHQ card, which was issued in 1973, was numbered PHQ1. Since then, the numbering has continued with PHQ2, PHQ3, and so on. This makes it very easy for collectors to communicate about the cards and the risk of mix-ups is low, with some notable exceptions:

The first PHQ card was issued in 1973, but it wasn’t until July 1976 the the Post Office started to issue PHQ cards for every new set of commemorative stamps.

The first PHQ card was issued for the 3 pence W.G. Grace stamp from a set of stamps commemorating County Cricket 1873-1973. While the stamp itself was issued on 16 May 1973, the PHQ card was not available for purchase until mid-July. Therefore, it should have been eligible for a first day of issue (FDI) postmark, but PHQ1 cards with such a stamp actually do exist with a Birmingham FDI cancellation. These cards were deliberately back-dated as a favour. Among collectors, they are not as popular as PHQ1 cards with 21 the July cricket postmark featuring Benson & Hedges. PHQ1 cards with the 1 September Gillette Cup postmark are also highly collectable.

PHQ2: 400th Anniversary of the birth of architect and designer Inigo Jones

PHQ2 was released on 15 August 1973 for one of the stamps in a set commemorating the English architect and designer Inigo Jones who was born on 15 July 1573.

The 10p card for the PHQ38 (issued on 22 August 1979) exist with two different reverses; the standard one and another one that states “With the Compliments of the British Post Office” in English and French. The card version with the unusual reverse was produced for the 1979 UPU Conference in Brazil.

For their exhibition of Elizabethan Sports Stamps, the Post Office’s National Postal Museum overprinted a small number of the 12p PHQ 47 card (issued on 10 October 1980). The overprinted cards were sold with the 12p Sports stamp affixed to the reverse.

Just as with stamps, PHQ cards are sometimes printed incorrectly, and such cards can become highly sought after by collectors.

Here are a few examples of errors and differences

Other errors, mistakes and oddities