There are many postcard collectors who only collect a certain type of postcard. Below you will find a few examples of postcard types that can form the basis of a collection.

Court card, or court sized card, was the name used in the United Kingdom for cards that measured approximately 4.75 x 3.5 inches. Court cards were very popular from the mid 1890s to the early 1900s. Compared to today’s standard postcards, they were smaller and less elongated.

Court cards did not have a divided reverse side. The reverse side was used for the address, while the front side was for the message.

Many of the court cards sent within the UK were not made there; they were imported from Germany where they were produced using chromolithography. 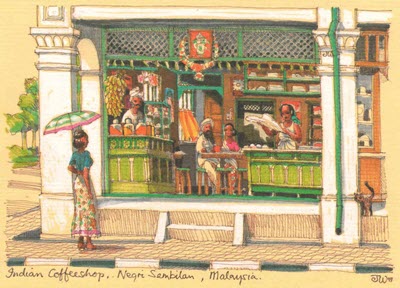 In April 1880, postcards intended for government use only were launched.

Reply postcards became available in 1890. A reply postcard makes it possible for the recipient to send a reply back without having to buy a postcard.

As railways were built to the beach towns of Great Britain in the 19th century, working class people could finally afford to go on a little beach holiday. The market for low-priced souvenirs grew and came to include seaside postcards.

In the 1930s, bawdy cartoon-style postcards became very popular among British beach vacationers, typically featuring stock characters and double entendres. During the height of their popularity, around 16 million saucy postcards were sent each year.

In the early 1950s, the Conservative government cracked down on “immoral” postcards and had the police confiscate them from the shops were they were sold.

RPPC stand for Real Photo Postcard. Among collectors, RPPC denotes postcards upon which a continuous-tone photographic image has been printed.

Kodak helped popularise RPPCs in several ways. In 1902, they started offering a preprinted card back that allowed postcards to be created directly from negatives. In 1903, they released the No. 3A Folding Pocket Kodak in 1903, a camera designed to create photos that were developed into postcard-size pictures – highly suitable for making postcards. In 1907, Kodak introduced a service they called Real Photo Postcards, which made it even easier for customers to create a postcard from any of their own photographs.

RPPCs are printed on actual photographic paper using the photographic process . They are not printed cards created by a printing press. If you look at a printed card through a magnifying glass, you will see how the image consists of numerous little dots.

For many collectors, they main attraction of RPPCs is that they depict an actual scene from the past, one that has not been touched-up by an artist before being sent to the printing press.

On a typical Japanese postcard, the address is written on one side and the message on the other. In this regard, they are similar to old-style European and North American postcards.

Official postcards were introduced in Japan in December 1873. Until 1900, the Post Office had a monopoly on postcards.

The Japanese Post Office guarantees that your New Year’s Day card will be delivered on January 1 as long as it fulfils certain requirements, such as being posted before the limit date and being marked with 年賀状.